With as deep a breath as she could draw into her little lungs, Claudia blew out her red candle’s flame. She sat with her eyes squeezed shut for at least ten beats of her heart. Claudia didn’t think she could take it if the spell didn’t work. She didn’t want to believe that her father had been right—that some dark magic would be too difficult and dangerous for a little girl of only eight—but she had to look eventually.

Claudia opened one eye first—just a peek—and saw two eyes staring back at her. She opened her other eye and then blinked both hard.

A dark shape had taken form before her, sprung forth from the candle’s smoke. Its eyes gleamed like little embers in a cloud of ash tinged with purple magic. Beneath its billowy, soft shape, Claudia recognized its features: a round head, two pointed ears, four stubby legs, and a long tail.

Claudia gasped in delight. “It’s you. It’s really you! Look at you, there you are—!”

The spell began to disintegrate, fraying at the edges.

Her heart nearly fell out of her chest. “No, wait—not yet!”

What was it her father had said? That some spells would break if she couldn’t keep her focus on them? Claudia bit her lip and focused on the memory of the little stray castle cat: the tilt of her head, her purr, and the faint scar across her ear. 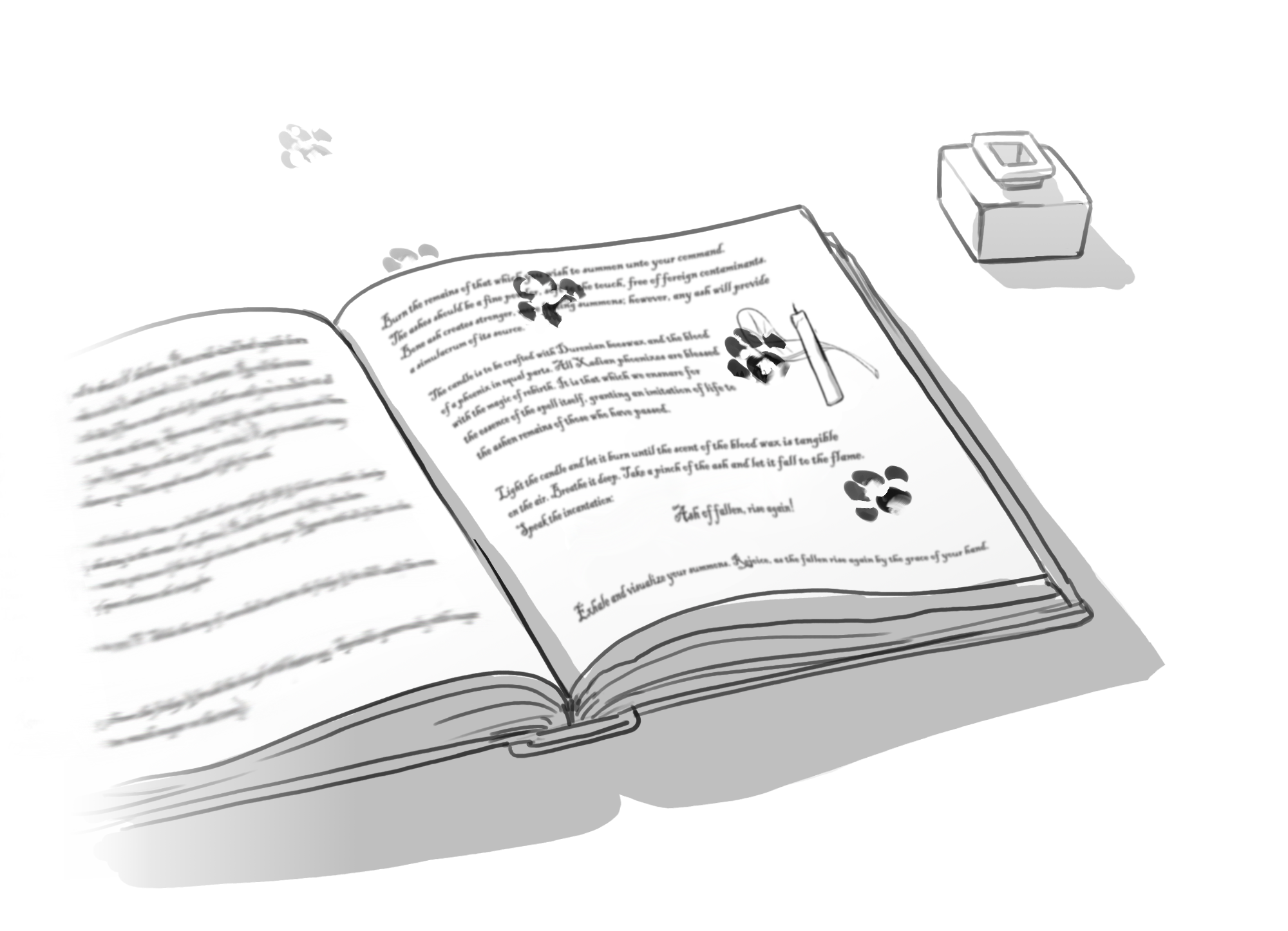 The purple glow intensified. Biscuit’s smoky form took shape again and purred—purred!—and meowed, but the sound was rough. Like her mother’s piano when it had fallen out of tune, sour and twanging. Broken. Claudia squinted and tried again, but something distracted her.

A sneeze from around the corner.

Claudia clenched a fist, determined to scold her brother and hold the spell all at once. She didn’t take her eyes off the cat. “Soren! I know you’re hiding over there!”

Soren poked his head in through the doorway, wiping the spill of his blonde hair out of his eyes to smile sheepishly at her. “Sorry, Clauds.”

“You followed me again!”

“There are spiders in this attic. Big ones. I’m supposed to—”

“—protect me, I know.” Claudia rolled her eyes and Biscuit’s shape wobbled. “You don’t have to, Sor-bear.”

“But I want to,” he said and came up beside her. Out of the corner of her eye, Claudia watched him freeze at the sight of the smoky little cat on the ground before Claudia. His hand flew to the little wooden training sword he kept at his belt. “Woah—!”

Soren shook his head. “No. She had a nice long life, but then… we had a little ceremony, remember?”

Claudia’s fist clenched again. She hadn’t wanted him to say it. Biscuit had been the oldest of Barius’ collection of strays, all of them named after things in his kitchen, and Claudia’s favorite. It wasn’t fair that she’d died. She hadn’t even been that old. All her kittens still needed her, didn’t they? “I know she died, Soren. But look.”

With a flick of her wrist, the dark magic holding the little cat’s ashes together made her hop and scamper as though she’d seen a mouse in the attic’s dusty corner.

Soren stepped back. “Clauds, what did you do?”

Soren said nothing, and Claudia frowned. She had hoped he would laugh.

Frustrated, she pulled on the magic again, calling the little cat back to her. Biscuit sprang to her side, trailing cinders. “You want to pet her?”

She ran her hand above the creature’s back as if petting her. Biscuit was warm—like their hearth in winter—but she didn’t burn like fire. Not unless Claudia wanted her to.

He sounded worried, so Claudia spoke with a big, wide smile. “No, but it’s okay, I knew I could do it! I watched Dad really closely when he did this spell, and he even showed me how to make the candle because I didn’t do it right the first time—”

“Dad doesn’t want you doing this stuff without him!” Soren squared his shoulders like all the castle’s soldiers. He thought he was so much like them, tough and brave and strong, but Claudia only saw a little boy trying to look bigger. “He said not until you’re older—”

She seized his hand. Her brother froze for a second, and Claudia thought she’d won, but he pulled his hand away and glowered at the cat. “Fine. But he’ll find out anyway if you keep that thing around. How long will it last, anyway?”

Claudia crossed her arms, proud and stubborn. “As long as I can make it last. Maybe forever.”

Soren scrunched up his nose, watching Biscuit circle Claudia and rub up against her leg the same way she did when she was alive. He turned a little green. Soren had never liked magic.

“Ugh! Stop being so weird about it, Soren. You just don’t understand.”

“Dark magic,” Claudia said. She cupped Biscuit’s warm cheeks in her hands. Smoke trailed between her fingers like whiskers.

“Dark magic can do anything.” 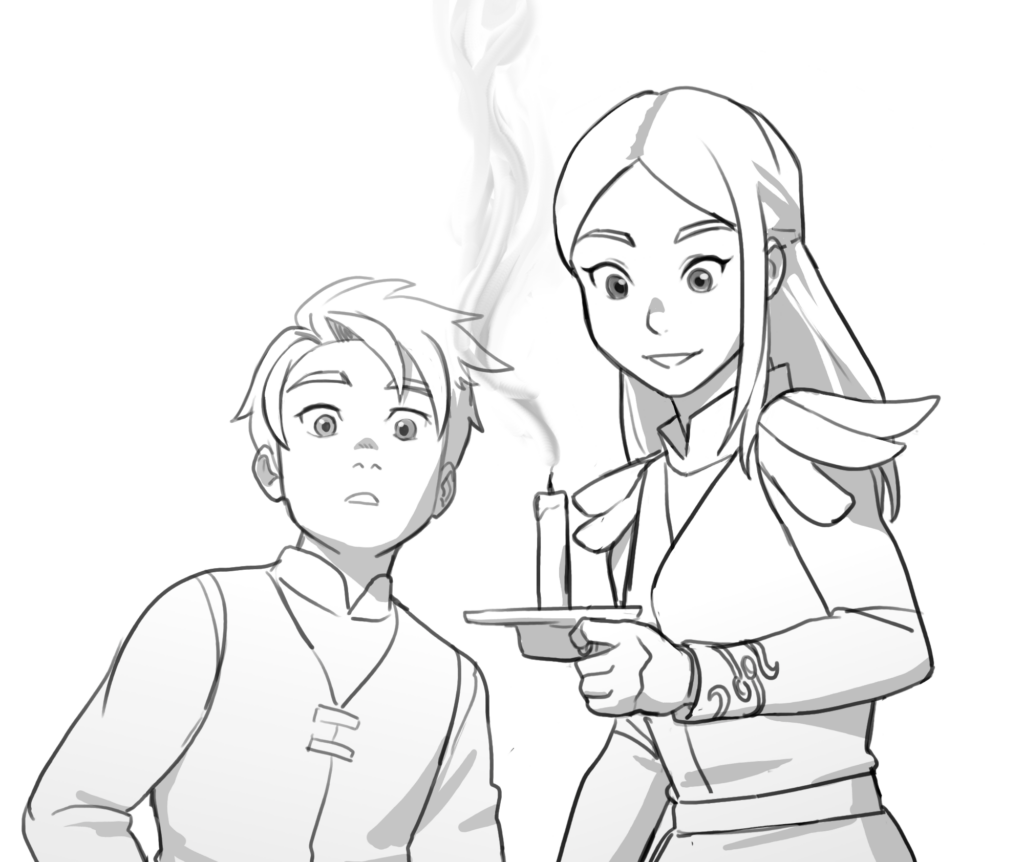