“Alright, Callum, you got this! It’s just a little… dungeon inventorying. Totally normal. Very normal stuff for a High Mage.”

He stepped off the last spiral stair onto the dirty floor and hesitated, wrinkling his nose. Full of dust and cobwebs and spiders and secrets, the room had not been touched in months, but Callum still felt like a trespasser. This place and everything in it had belonged to High Mage Viren—and though it made his skin crawl, it now belonged to Callum. Which meant it was his job to sort through the things his predecessor had left behind for… anything of interest.

With one fingertip, Callum drew a pale blue rune in the air. He’d need a little help.

A playful little whirlwind spun up at his feet. Callum squatted down and patted the wind spell on its breezy top. “Hey there, little guy. Can I call you Angus?”

The whirlwind hummed in response.

It was not, of course, alive, but in the creepy dark of the chamber, Callum felt better with someone—something to talk to. “C’mon, Angus, let’s get to work!”

With a wave of his hand, he sent the dizzy little vortex bouncing onto a shelf. Dust and cobwebs gave way to its cheery whirling. 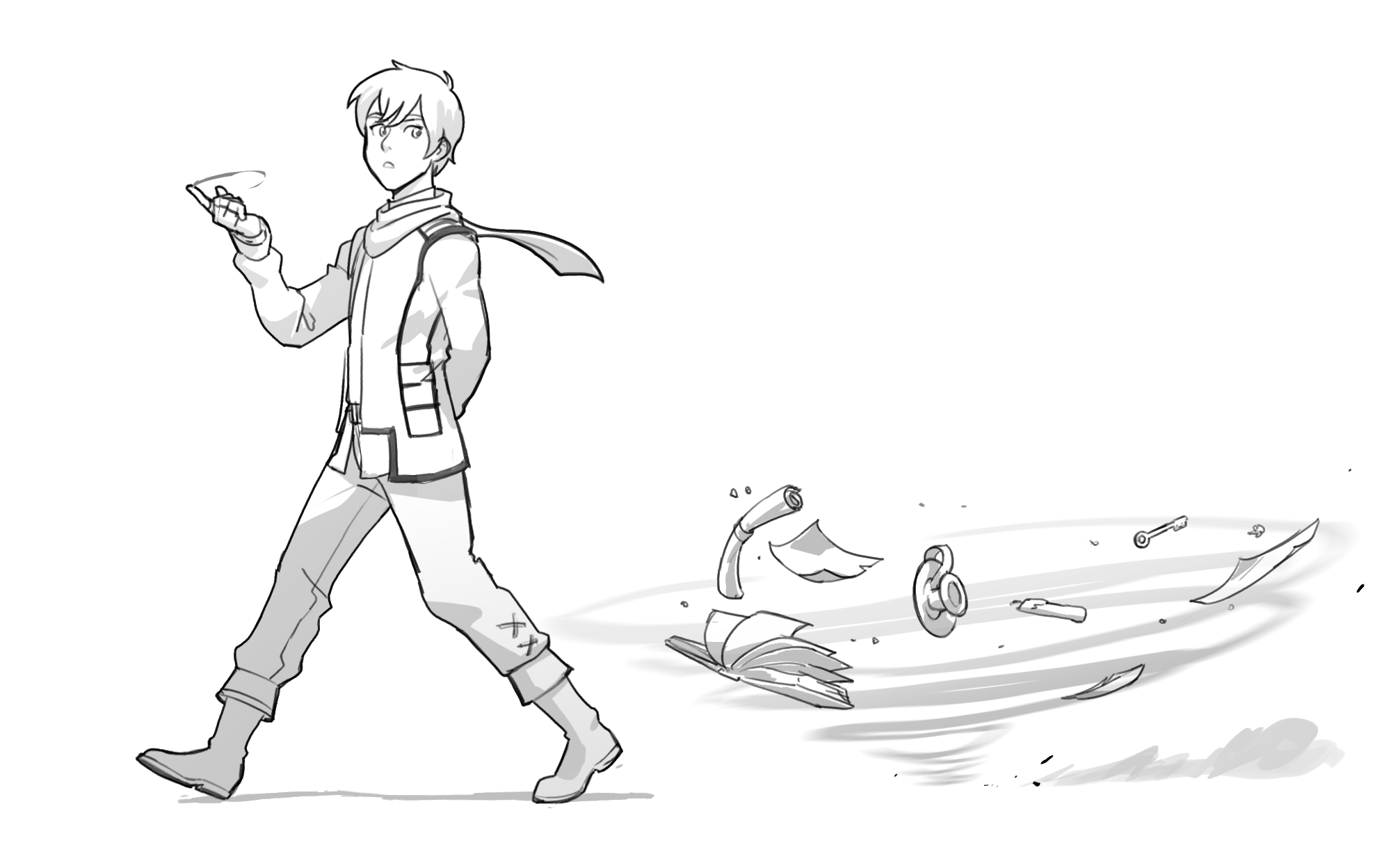 “Wow,” Callum said, pleased with his spellwork. “Wish I’d known about you back when I got a talking-to for my messy room every week. You know, Angus, last time I was here—wow, it feels like forever ago—it was the night everything changed. The night we found Zym’s egg, right over there! And it was the night I met—”

It was impossible to say her name out loud.

It still hurt. She was still gone, and Callum had no idea if she’d ever come back.

Callum shook his head. He couldn’t think about her. Not now.

Gulping down the pain, he focused on the things around him, as much as they turned his stomach. Callum picked up a heavy jar and pressed his nose against it. Several six-legged marshmallowy creatures bobbed around inside, and through the glass, the room appeared green and distorted. He shuddered and quickly put it back.

Nearby, a warm stone bowl held a mixture of delicate scales, some black or white, some glassy. Further down the shelf, his hand grazed something dark and soft and familiar—Shadowpaw fur. Two intertwined white braids hung from the wall. Callum flinched away, unnerved.

His spell zipped off around a corner. Callum followed Angus’ trail of kicked up-dust past a cluttered table. He caught its edge with his elbow and knocked something to the floor. Something long and slender, made of metal – something familiar. It clattered against the stone.

Callum picked it up. His stomach lurched.

It was the weapon that killed his father. The weapon of someone Rayla had loved. Several feelings—too many feelings—collided at once.

A sudden rush of magic and wind ripped through the room. Callum yelped. Dust rained onto the shelves, the floor… and Callum, too. He’d lost focus—and control of his whirly cleaning spell. Callum despaired. “Hang on, Angus, I’ll—”

Before he could cast the rune again, he sneezed so hard it blew him backward a step, and he nearly sliced his nose off with the bowblade in his arms. He let the weapon clatter to the ground and kicked it beneath the table with his foot, where he couldn’t see it anymore.

“Ugh! I should just seal this whole place up, Angus!” he declared, sniffling, to the spell that wasn’t there anymore. “The whole dungeon and everything in it. Everything down here—it’s all horrible. I should just lock it all away, forever. That’s the best thing to do—right?”

In the silence, there was no one to answer.

Callum’s eyes prickled with dust and tears. He rushed back to the spiral staircase—but as he reached for the figurine that would activate them, he noticed one last door he hadn’t checked. The small chamber beyond it lay dark and silent. A gleam caught his eye.

Callum blinked at his own reflection.

Curious, he stepped through the door—and there it was. 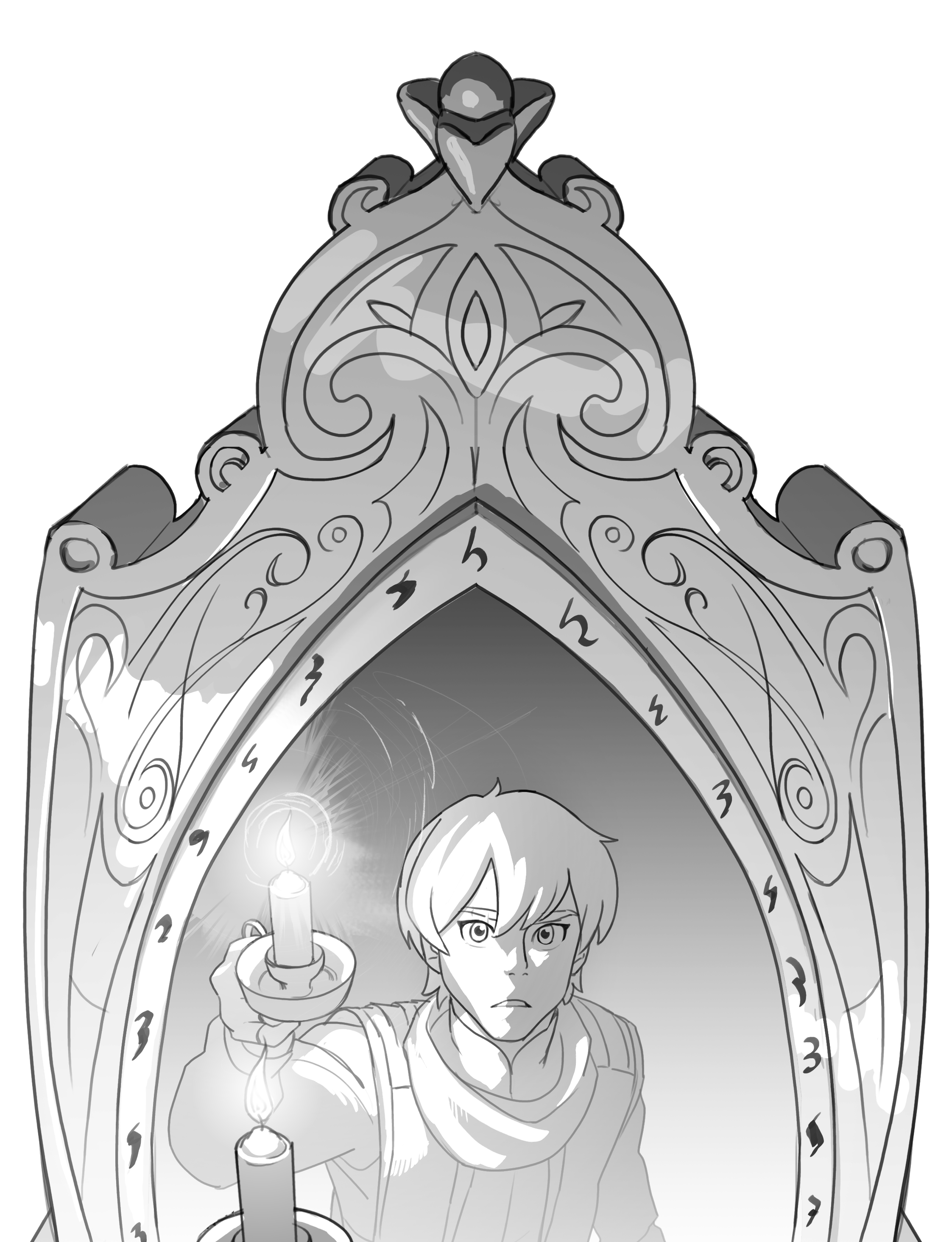