While winter in Xadia may be experienced and celebrated differently by each of the continent’s diverse communities, one common theme has emerged throughout centuries of local tradition (particularly among the five human kingdoms): The practice of sharing.

To honor this “season of sharing,” we now share with you some of Xadia’s most popular human winter traditions…and some of their favorite recipes, as well!

Winter in the Kingdom of Del Bar

In Del Bar, it’s tradition to greet the first light of the new year from the peak of the closest and coldest mountain. Entire villages will make the treacherous overnight climb together, often wearing nothing but a single layer of simple clothing, so that they can welcome the sunrise with ceremonial throat songs which have been passed down for generations. This offering of music and display of perseverance is seen as a way to honor the cold and its influence over Del Barian life, granting prosperity and strength for the year ahead. 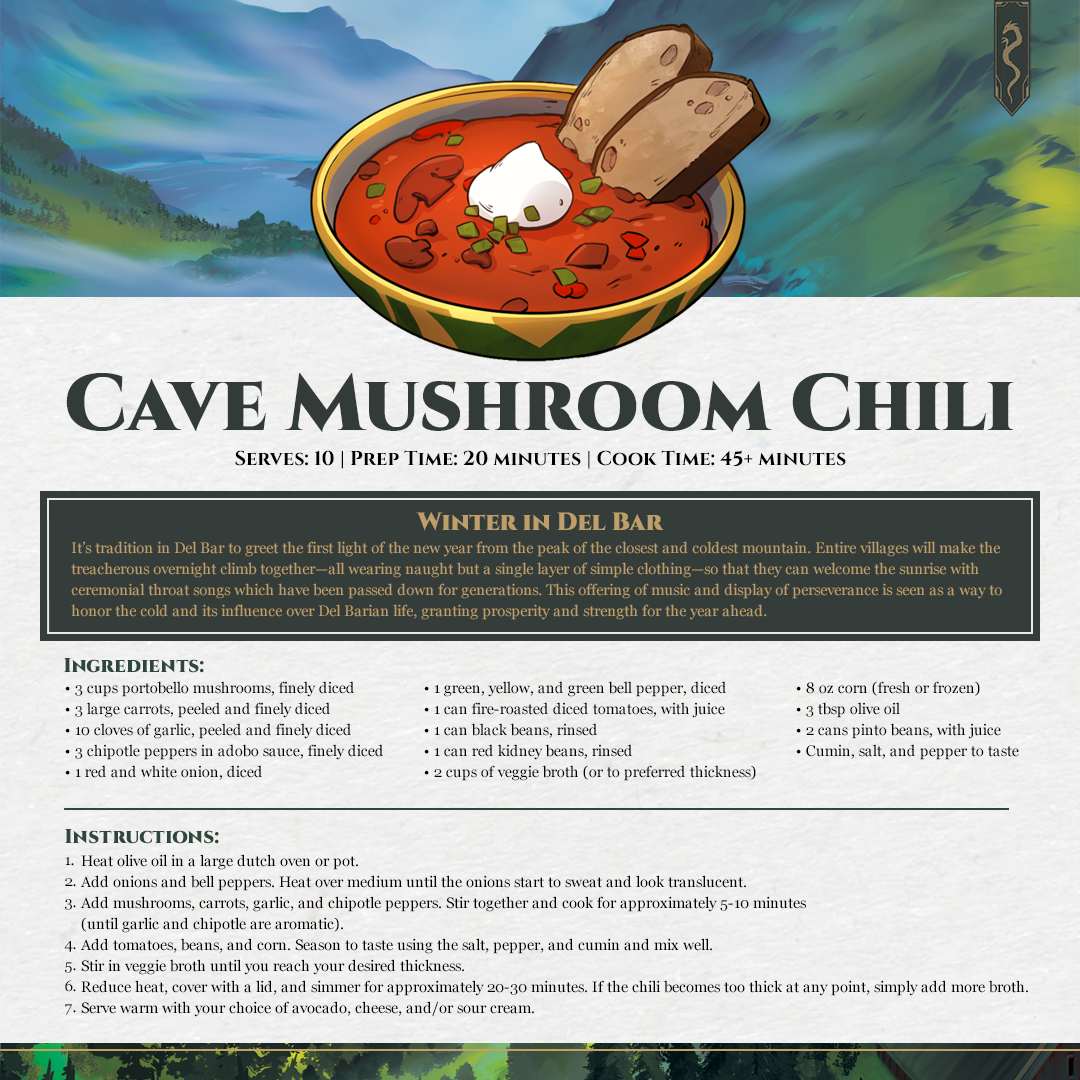 Winter in the Kingdom of Neolandia

Unlike the other human kingdoms, Neolandians consider the official start of the new year to be the rainy season—or when elephant calves are typically born. In the winter, however, when the river water is low and the temperature at night is just above freezing, villages will host large festivals dedicated to the bartering and trading of gifts. At the start of the festival, loved ones exchange small trinkets, which they will then barter multiple times in order to secure something of greater value. Inspired by the Neolandian legend of “A Peanut for a Palace,” the more valuable item is then presented to the original gifter over a special meal of flatbread and tea. 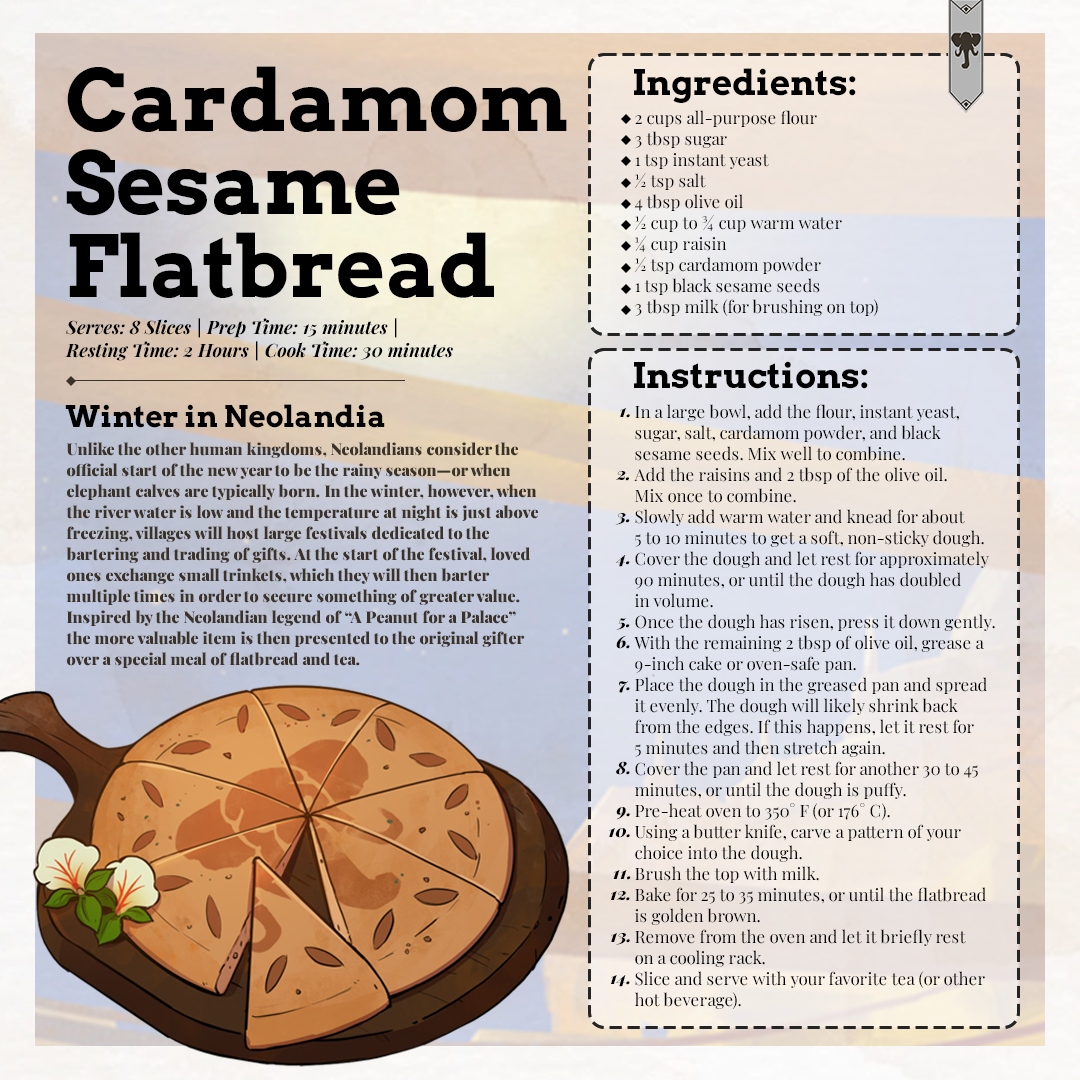 Winter in the Kingdom of Duren

In Duren, winter is a strange, quiet, and reflective time of year. With the shifting of the season, farming and other day-to-day activities naturally slow, but hard work remains a priority. As a result, it’s very common for friends and family to be gifted materials to make something special so that growth and learning can continue during the otherwise somber winter months. (So, instead of receiving a doll as a gift, a child will be given materials to make the doll themselves.) 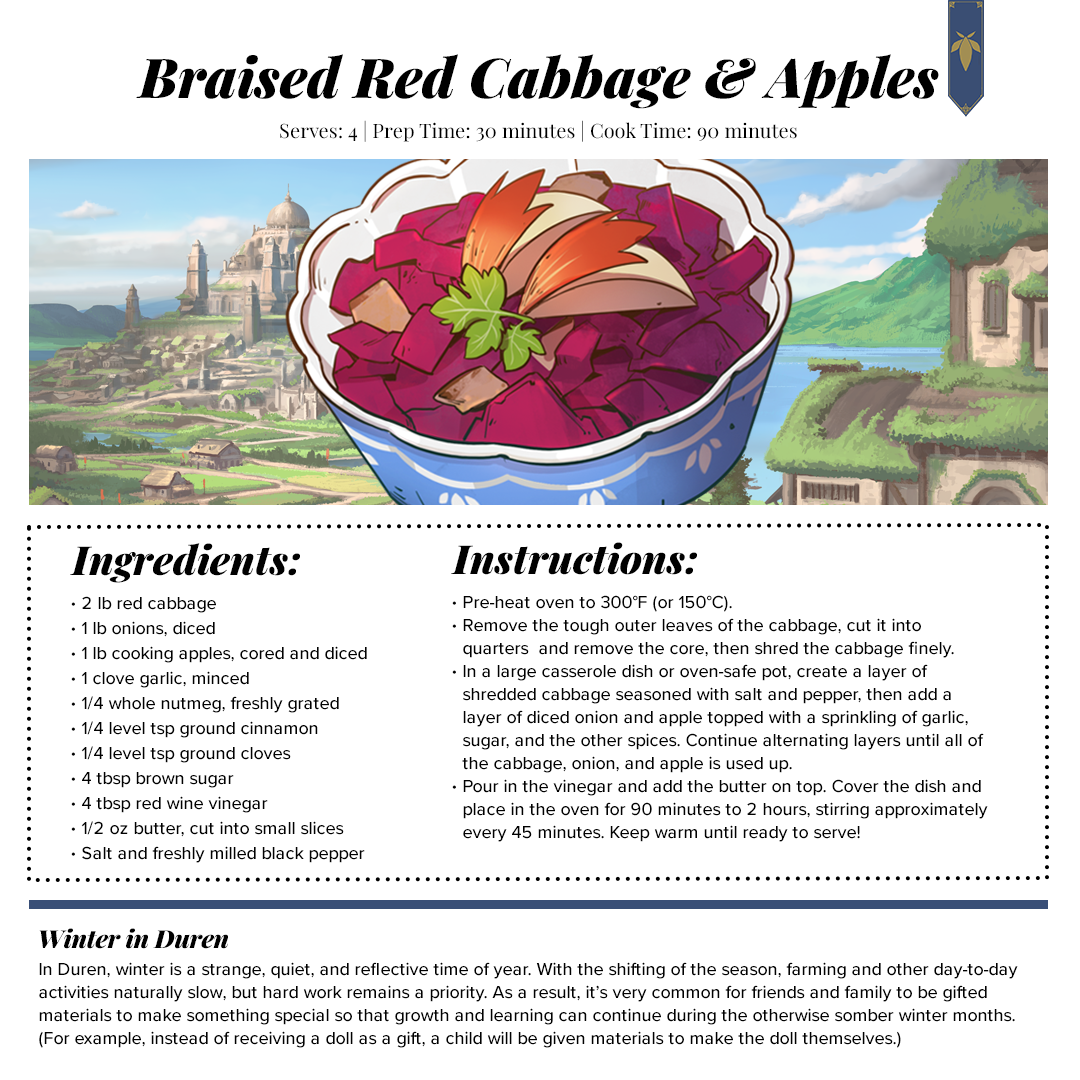 Winter in the Kingdom of Katolis

Although there are many ways the winter season is celebrated in Katolis, gathering in the capitol city is a common nighttime destination. Main street is traditionally decorated with candles and cedar tree branches, and vendors sell spiced cider from giant cauldrons paired with pastries filled with pork or strong cheese from Duren. In recent years, some have argued that winter only truly begins on Queen Sarai’s birthday (December 3)—which is marked by a celebration of sweets and baked goods, and often greeted by the first gentle snow of the season. 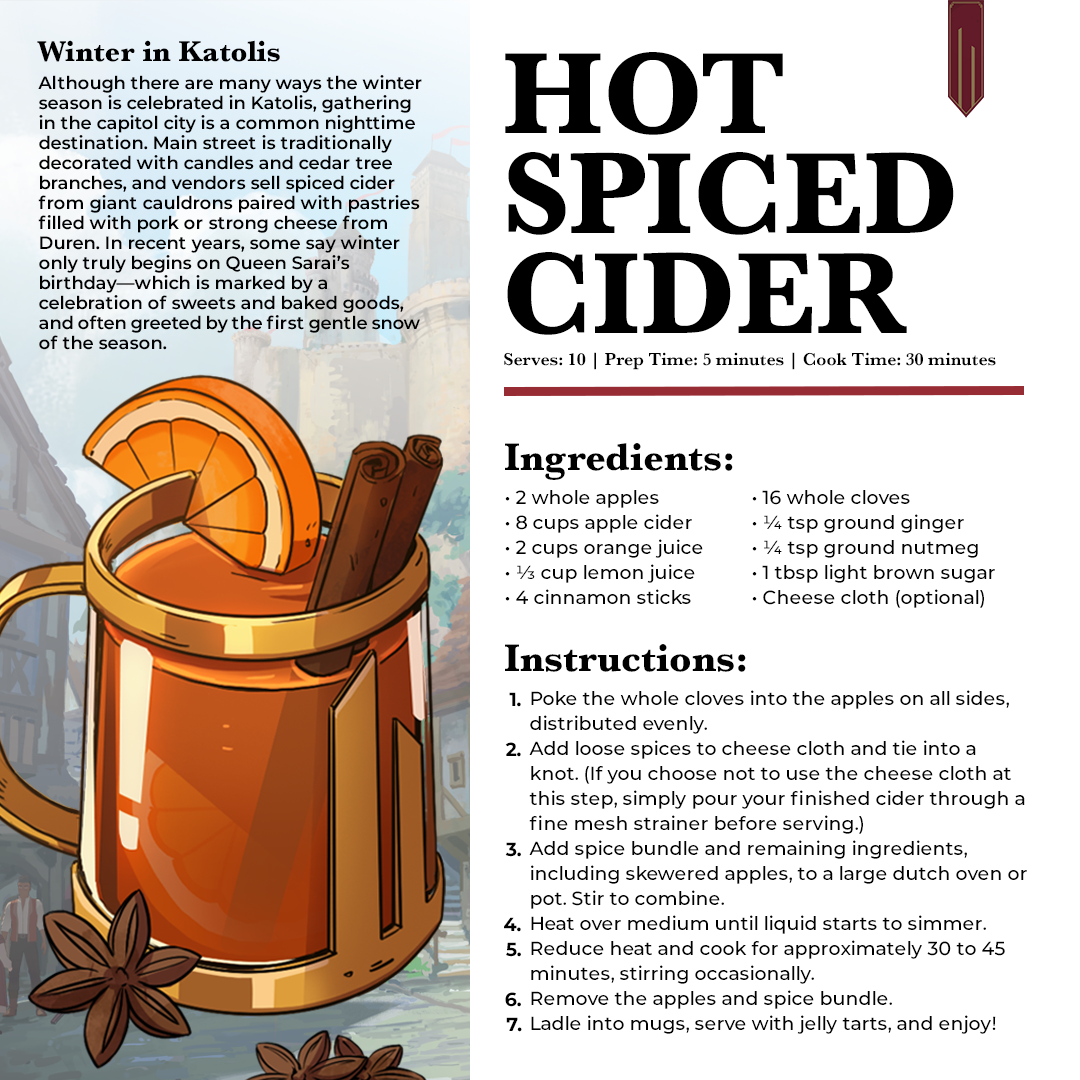 Winter in the Kingdom of Evenere

Evenerians rarely interact with anyone outside their immediate community, though the long, dark flood season is a notable exception. During this time, villagers from across the kingdom will decorate their boats with colorful lanterns and travel to a designated lake, river, or harbor. There, all the boats will dock to one another to form a massive, floating festival that lasts for several days. Because it’s one of the few times of year when adults of age leave their hometown, winter is also considered the romantic season in Evenere. 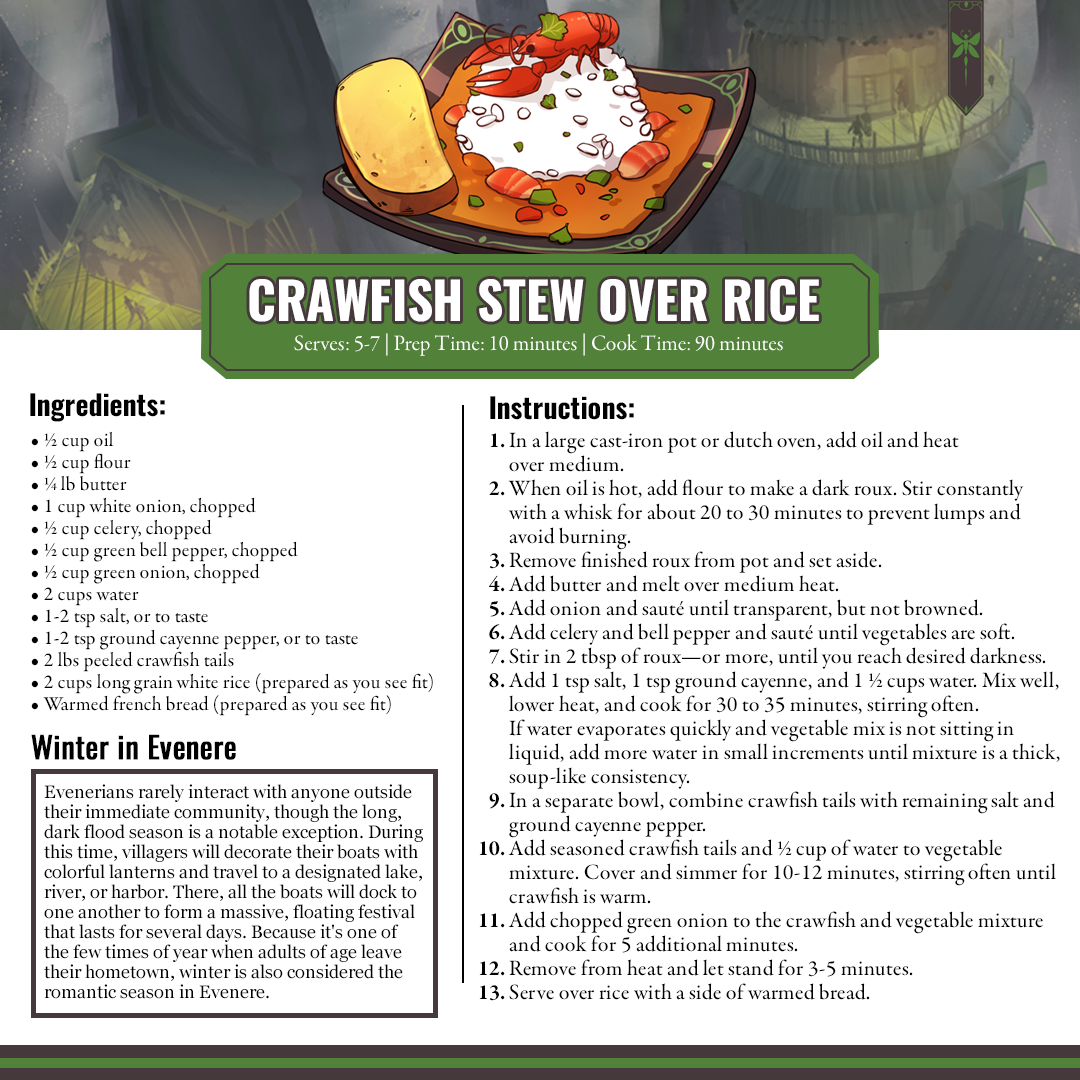 If you loved learning about these winter traditions, be sure to check out Tales of Xadia for additional art and lore from your favorite human kingdoms…and more!

(Have you made any of the human kingdom winter dishes yet? Share your photos with us on Twitter by tagging @TheDragonPrince and/or using #TheDragonPrince hashtag.)