Three new books coming in 2020 from Wonderstorm and Scholastic!

Wonderstorm and Scholastic have joined together to bring fans of The Dragon Prince three new books that will take readers beyond the frame and deeper into the world, characters, and stories they love!

Callum’s Spellbook is a lighthearted, in-world notebook in which Callum documents, through entries and drawings, all the things he encounters and learns on his journey to Xadia. The Dragon Prince: Book 1: Moon is a core novel that elaborates on the events in season one of the animated series, with deeper characterizations and expanded plotlines. Through the Moon is an original graphic novel with a new canon story set between seasons three and four of The Dragon Prince.

Callum’s Spellbook features original concept art not found anywhere else. This humorous, in-world notebook has everything a fan needs to know about the magical world of The Dragon Prince. During his epic journey to Xadia, Callum writes about and draws pictures documenting everything that is happening around him, including stats on elves and dragons, places visited in Katolis and Xadia, and runes and spells. There are also notes added by Ezran, Rayla, Claudia and Soren when they “borrow” the notebook from Callum.

The Dragon Prince Book One: Moon 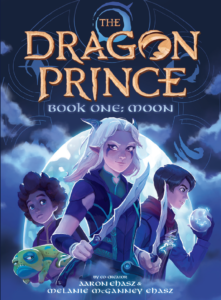 With the world on the brink of war, three young heroes from opposite sides of the conflict embark on a dangerous quest that could change everything. This beautiful book expands on the events of season one of The Dragon Prince. Written by Aaron Ehasz, co-creator of The Dragon Prince, and Melanie McGanney Ehasz, this first epic novel takes readers beyond the frame of season one with deeper characterizations and expanded plotlines.

The Dragon Prince has been reunited with his mother, the Human Kingdoms and Xadia are at peace, and humans and elves alike appear ready to move on. Only Rayla is still restless. Unable to believe Lord Viren is truly dead, and haunted by questions about the fate of her parents and Runaan, she remains trapped between hope and fear.

When an ancient ritual calls her, Callum, and Ezran to the Moon Nexus, she learns the lake is a portal to a world between life and death. Rayla seizes the opportunity for closure and the chance to confirm that Lord Viren is gone for good.

But the portal is unstable, and the ancient Moonshadow elves who destroyed it never intended for it to be reopened. Will Rayla’s quest to uncover the secrets of the dead put her living friends in mortal danger?