“We did it!” Ezran flopped onto his giant bed with a triumphant laugh, spilling an armful of pastries onto the blankets. “Congratulations on your first jelly tart heist, Zym!”

The Dragon Prince landed beside the pile of baked treats and chirped proudly. Bait struggled up beside the little dragon, nearly sliding back to the floor. Ezran reached to steady him.

Bait grumbled in thanks. His bulbous eyes focused on their prize. Ezran followed the glow toad’s gaze and winced at the smattering of crumbs he could already see in the stitching of his quilt.

“Right. Plates! We’re supposed to have manners now, aren’t we?” He reached into the bedside table and set three mosaic plates between them. They were precious things: Queen Sarai had made them herself with bits of colorful pottery fragments, sealed together with golden lacquer. King Harrow had once told Ezran that she kept them near the bed for the nights when her own sweet tooth got the better of her. 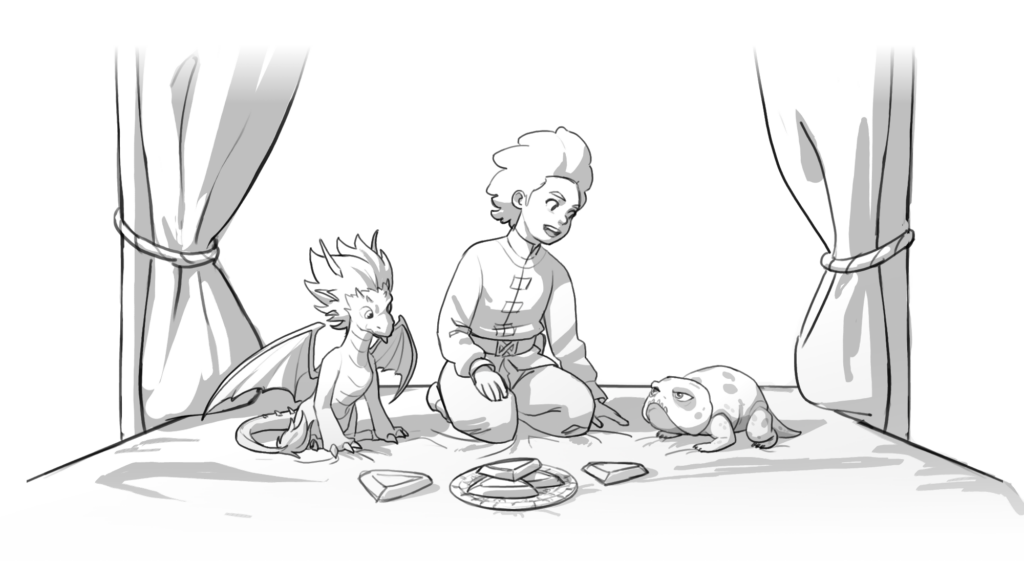 “Hold on, Bait! I’m almost done!” He put the final touches on a precarious arrangement of jelly tarts on the plates before him—the kind of presentation he knew grown-ups appreciated. “There! The Jelly Tart Council is hereby called to order.”

Bait turned a particularly fancy shade of violet and sat up. Zym did his best to mimic the glow toad’s posture, straightening his spine and tilting up his chin, wings spread. His tail thumped against the mattress.

His noble council members set to work enjoying their tarts, down to their last crumbs. Before long, Zym and Bait’s were gone, but Ezran still had a small pile on his plate. Zym eyed Ezran with a tilt of his head and Bait prompted him with an impatient grumble. Uneaten jelly tarts were proof of what they already knew: that the young king’s thoughts were heavy.

Well—he wasn’t a king again, not yet. And that was half the problem.

Ezran took a deep breath. “They’re going to crown me again in a few days. A recoronation. Opeli says it will make Katolis feel whole again. But—Viren stole my father’s crown. So they’re going to do the ceremony… by giving me his sword.” Ezran toyed with a jelly tart, but didn’t eat it. “That feels wrong, doesn’t it?”

“Because swords are for fighting. For wars. Does every king need a sword? I know I’m King Harrow’s son, but I don’t want to make the same mistakes he did.”

His lip trembled. It surprised him—Ezran thought he was done with crying.

“And I don’t want to forget him, either.”

Huffing, Bait turned to Zym for assistance. Zym trilled, beaming toothily, and stepped hard on the edge of his plate. It flipped and landed on Bait’s head like a hat, freckling him with crumbs. The both of them turned back to Ezran.

“Change it into… a hat?” Ezran groaned, reaching to take the mosaic plate from his head. “Bait! Zym! That doesn’t make any sense! And these plates are special… please be careful–”

He stopped. He could see himself reflected in the plate’s shine, and his fingertips grazed the golden lines between all its pieces. The plate had been something else, once. Many other things. Ezran understood. “I can remember him… pieces of him… without becoming him. I can be something else,” he said. “And so can the sword.”

Zym thumped his tail against the bed again, and Bait turned an approving shade of orange. Ezran pulled them both into the kind of hug Aunt Amaya had taught him, toppling Bait’s crown-plate to the quilt and turning him pink. Zym licked his cheeks with zappy kisses. “Thank you, thank you! You’re the best Council I could ask for.”

He shoved a jelly tart in his mouth.

“I need a metalsmith—one who can turn a sword into a crown.” Harrow’s little boy hopped off the bed and ran for the doors, but it was King Ezran who tugged them open. 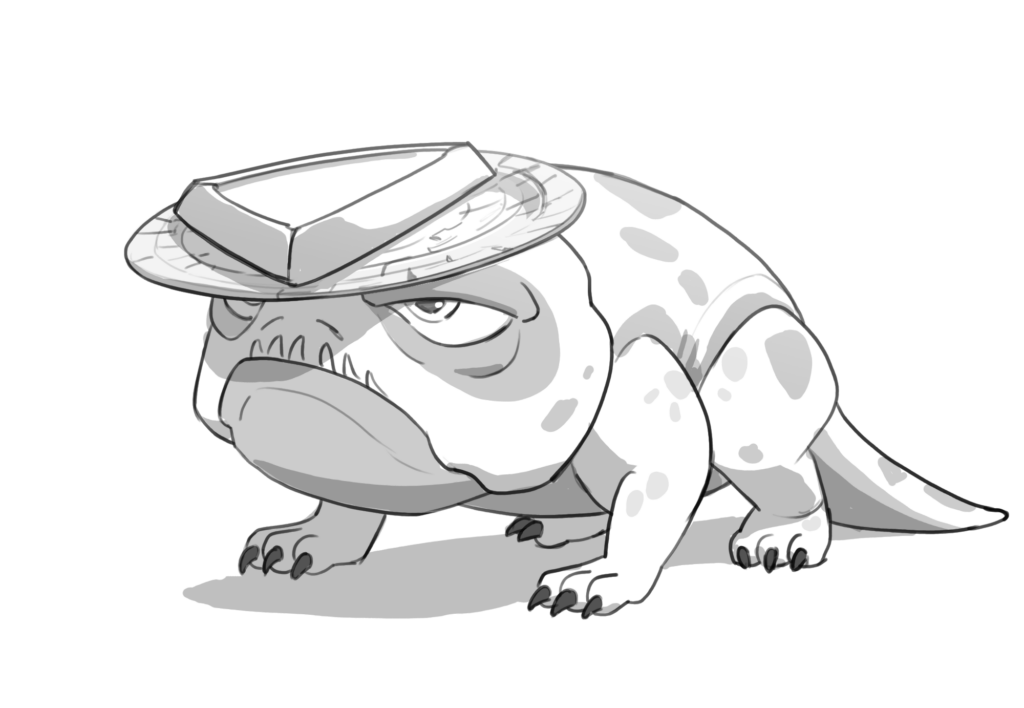