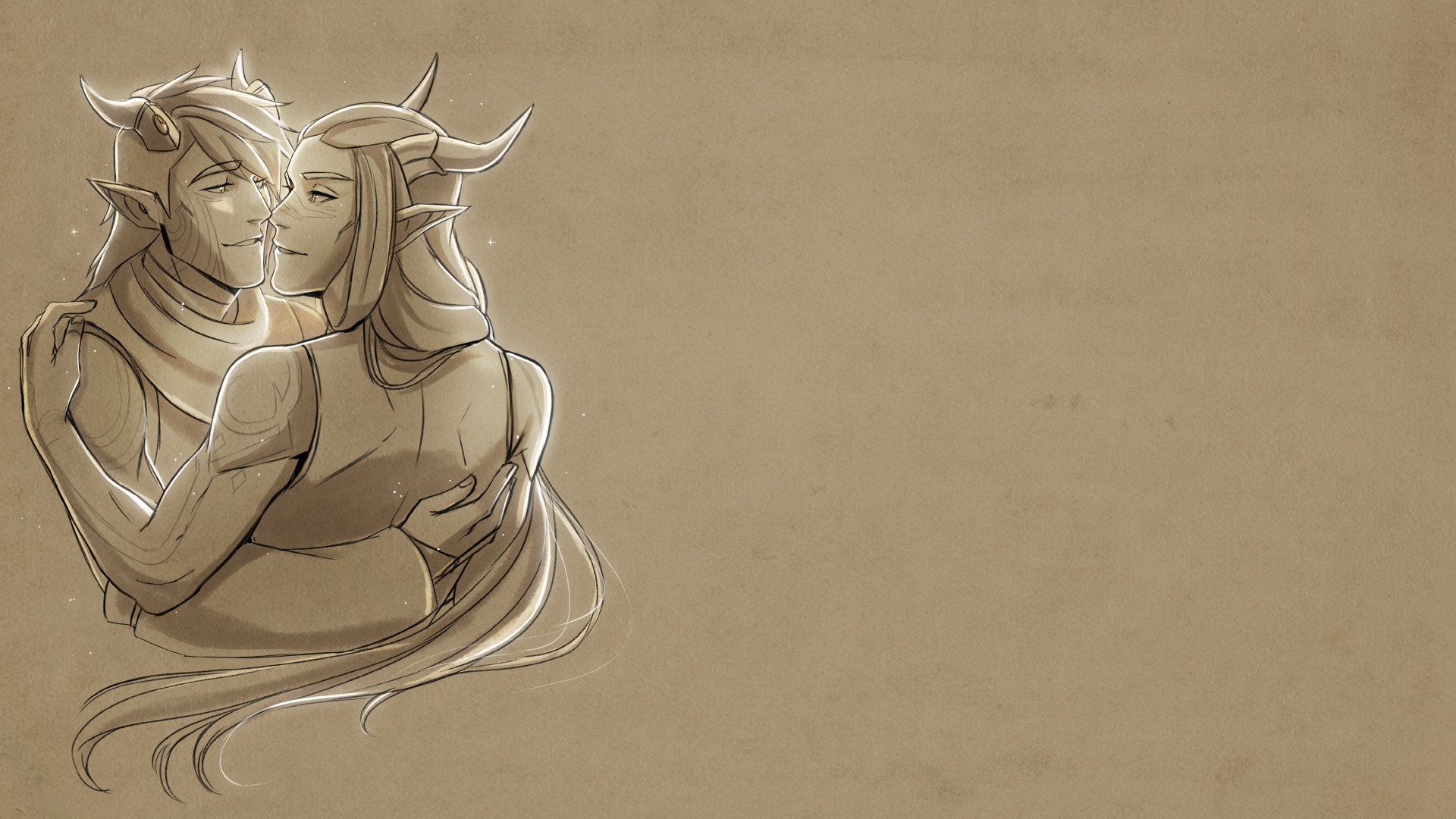 Rayla flopped backwards into the grass with a long, defeated groan. “We’ve looked everywhere! We’re never going to find a lunabloom!” Tears glistened and began to slip down her sun-flushed cheeks, but she covered her eyes with an arm so he couldn’t see them. “Ethari’s birthday is RUINED!”

Runaan knelt gently beside her and shooed a displaced grasshopper away from her knee. “Come now, Rayla. It’s been too hot and dry. The lunabloom flower likes cool nights and morning dew.”

“I know,” Rayla pouted, stubbornly wiping at her eyes. “It’s just, they’re his favorite, and I wanted to bring him something he likes.”

“There are other things Ethari likes.”

Rayla sniffled and blinked at him, a glimmer of realization in her eyes. Little limbs flailing, she pushed herself up to sit and look at him. “Runaan! You have to help me! You know all the secret things Ethari likes!”

He tilted his head at her and smirked, humoring the notion that his husband’s favorite things were subtle or secret in the slightest. “I do. And what makes you think I’d tell you?”

She reached forward to clutch at his hands, deadly serious. “I’ll keep them secret. I promise.”

Runaan stood up, pulling her with him. “Then dust yourself off, secret-keeper. We haven’t much daylight left.” 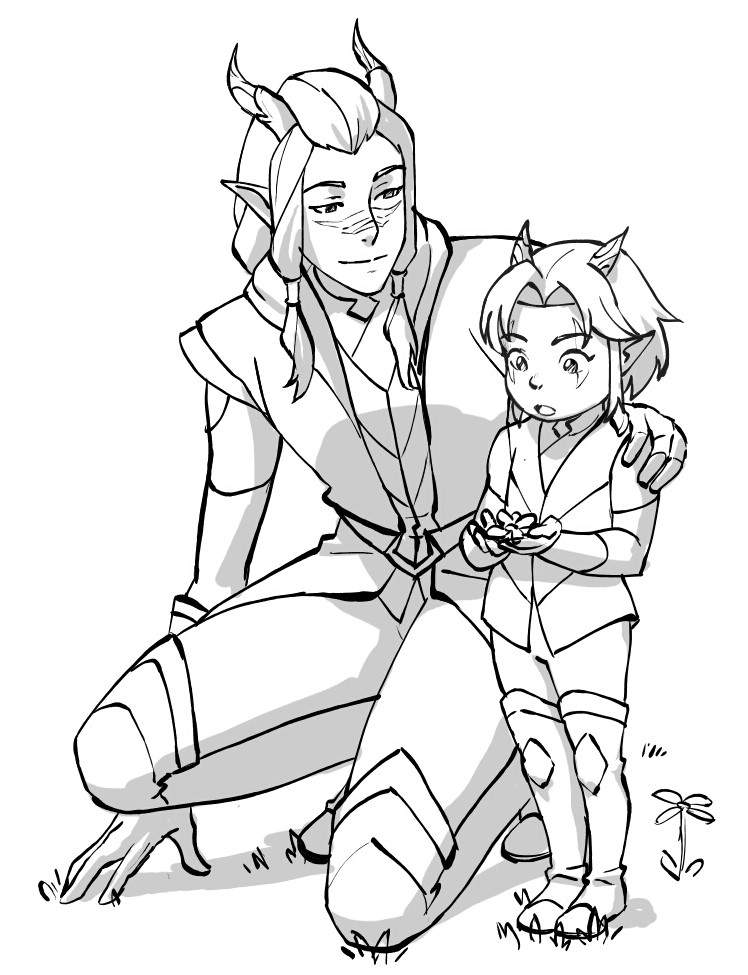 Near the edge of the forest, where the trees thinned and the ground turned grey with the nearness of the Midnight Desert, great spiny bushes dappled with yellow and pink flowers grew in what little shade remained. They took longer to find than Runaan would have liked: the summer heat had wilted their numbers, but eventually he pointed to a thorny cluster twisting its way out from underneath a log. A stubborn plant, he thought, but hearty.

“Rayla. You know what these are, yes?”

Rayla frowned at the bush and the small flowers, unimpressed. “Sun’s Tears. Ethari likes these? They’re not even very pretty.”

She was comparing their bland shape and washed-out colors to the lunabloom, of course. Runaan shook his head. “Rayla, you know to look deeper than ‘pretty.’ Remember your training: what is it that makes these flowers unique?”

Rayla puffed out her chest a bit. She tried to hide it, but Runaan could tell she nearly burst with pride at knowing the answers to his questions. “You can dry their petals and grind them with oil to make a healing salve.”

“For all the scratches and bruises you get in training! They make him sad.”

“I–well,” Runaan balked, and felt his cheeks grow the slightest bit warm. Had she really noticed something like that? The girl was as keen-eyed as her mother. “Yes, I suppose. And also for his hands–”

“When the forge is too hot,” Rayla finished for him.

“Very good, my sharp little blade. Let’s bring him some, shall we?”

Rayla huffed a bit as she reached to pluck a handful of flowers from the bush. “They’re still not very pretty. I’m going to braid them!”

Rayla poured all of her attention into braiding the flowers into a ring. It was enough to distract her from the sound of the river as they approached. When she finally placed the little crown of flowers on her head and looked up, her eyes widened. The water was only a few steps away. Runaan was careful, of course, to lead her to a riverbank where the current was slow and the water clear enough to see the bottom.

“Nothing to be afraid of,” he told her, taking her hand and leading her up to the water’s edge.

“I’m not afraid,” Rayla insisted, but her hand tightened on his.

They peered down at their reflections. Runaan noticed Rayla’s tiny horns had begun to sharpen at their points. In only a few years, they’d be fully grown.

Rayla pointed at their reflections and gleefully exclaimed, “Ethari likes US!”

Runaan smiled. “Of course he does. But he likes the stones down in the mud, too.” Knowing Rayla would never do so willingly, he reached down into the water and pulled up a handful of little brown rocks, letting the stream wash the mud from his fingers.

“Those are the ones he has to rub until they’re shiny,” Rayla observed. “That takes SO long. Does he want to do something like that on his birthday?”

“Ethari likes his work. Things don’t feel like work when you love doing them.”

Rayla pondered this as Runaan placed the clean stones one by one into one of the pouches in his belt. “Do you love being an assassin?”

Runaan paused, the last stone still in his hand. He fiddled with it a moment, its smooth wet surface a gentle comfort. Then he sighed, slipping it away and tugging the drawstring tight. “That is a different sort of work, Rayla.”

Luckily, she didn’t seem keen on pressing further. To his surprise, she’d plunged one arm into the water and pulled out another stone, offering it up to him. “One of them has to be from me,” she said. Runaan smiled and took it.

The elves of the Silvergrove had foraged all of the summer fruits in the forest they could find earlier in the season. Runaan and Ethari had plucked them from branches and passed them down to Rayla, who dutifully placed them in waiting baskets. Some of the sanguicots had been nearly as big as Rayla’s head, and she wobbled trying to carry them.

But as the sun began to set, Runaan caught a glint of violet in the trees above. A plump purple fruit peeked shyly out from behind the leaves of an otherwise naked branch. He tapped Rayla’s shoulder and pointed up.

Rayla gasped. “A star plum! We have to get it for Ethari! But…” Her ears drooped the way they always did when Rayla grew frustrated with a challenge. “It’s dangerous. The bark is too smooth to climb.”

“I’ll get it,” Runaan told her. “But watch carefully.” 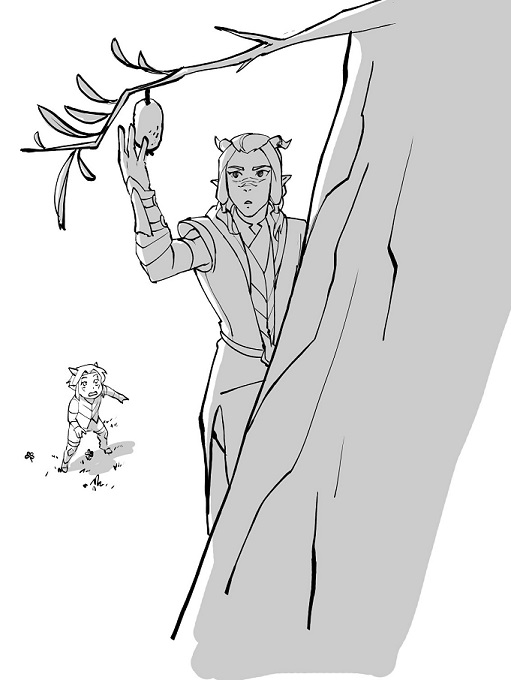 It was an effortless climb for him, but he took it slow to show her the steps with clarity: first he stepped to the easy footing of a nearby stone ledge, then one-two-three jumps between trees close enough to use for momentum, then the final arms-outstretched leap to the star fruit tree’s smooth branch.

Rayla watched in rapt, nervous attention. She kept her face brave, but Runaan could tell her little heart was pounding.

When Runaan leapt back down to the grass and handed her the plucked star plum, Rayla gasped with joy and quickly bowed her head to him, an assassin’s sign of respect. “That was brave. I want to be that brave, when I’m bigger.”

“Would you like to know a secret about being brave?” Runaan asked, kneeling down to her. “Sometimes being brave is hard, but it can be easy, too. The secret is: it’s easiest to be brave for the ones we love.”

Rayla nodded firmly, eyes gleaming with determination. “I’ll be brave for you someday.”

“You are already brave enough for me, little blade. Come — it’s nearly dark.”

Rayla yawned and blinked heavy eyes as they neared the outskirts of the Silvergrove. The evening brought a blanket of comforting dark and a gentle breeze. Runaan noticed the glowing flower at the exact same moment he noticed the dew in the air.

“A lunabloom!” Rayla noticed, too, her weary eyes suddenly wide.

It was a young lunabloom, its blue-blushed petals still curled at their edges, the cluster of seeds at its core only just beginning to emit their gentle light. The sight of it made Runaan feel soft: he thought of Ethari the night they promised their hearts to each other, the lunabloom glow a gentle blue whirl around them as they danced.

“Oh? Have you changed your mind?”

“Look. There are others, but they’re just buds,” Rayla said. Clusters of shy, closed flowers hid themselves amongst the leaves. “They’ll bloom tomorrow night. If I bring Ethari just one, it will be a nice present, but… what if we come back tomorrow night instead?” She looked up at him, eyes gleaming with excitement and, deep within, a wisdom beyond her years. “That way the present isn’t just a flower. It’s a surprise!”

Runaan couldn’t help but ruffle her hair affectionately. She blinked in surprise then smoothed it down, mumbling and giggling a protest. “Hey! Runaan!”

“That sounds like a perfect gift, Rayla. Ethari will love it.” 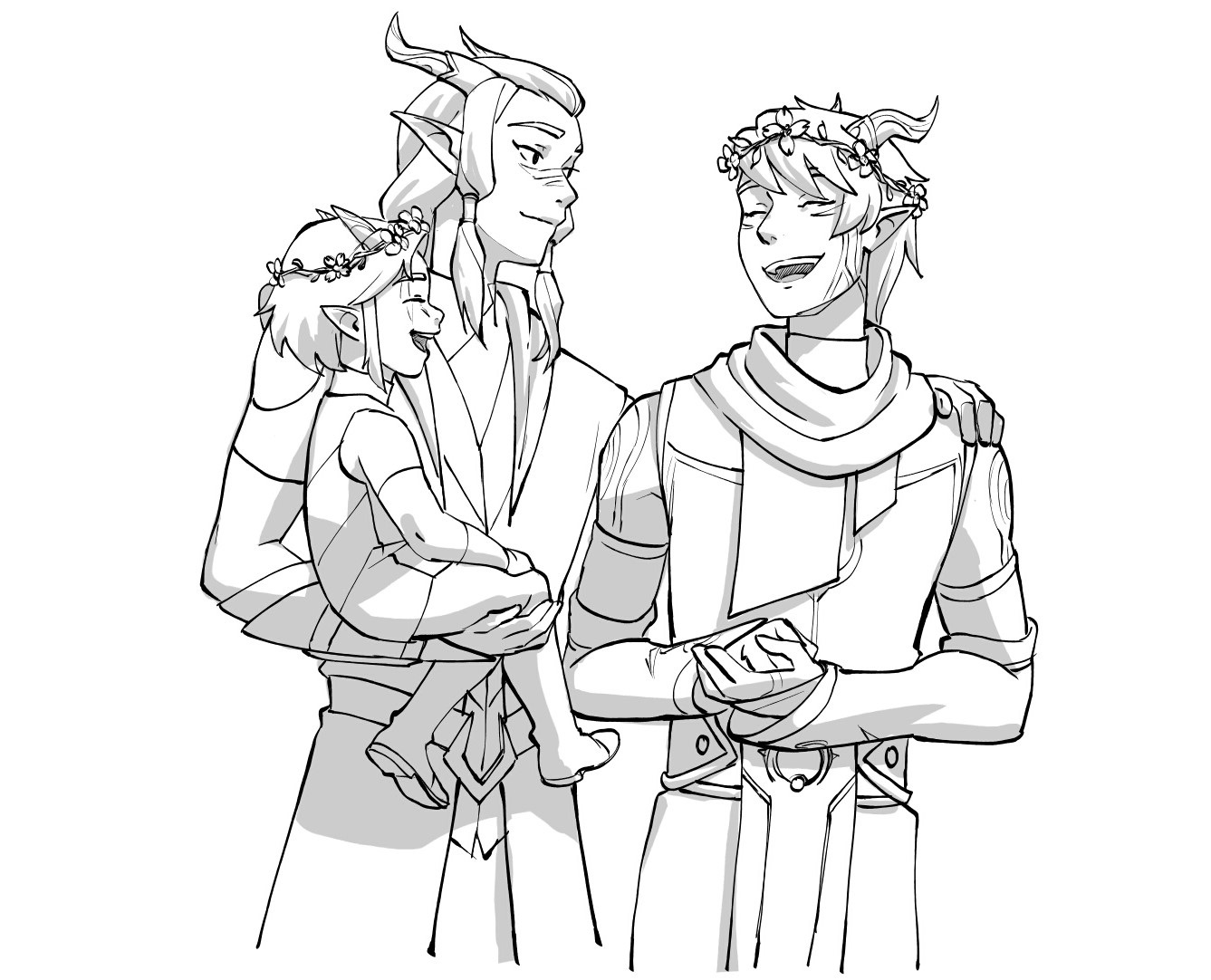