“Once upon a sunrise,” Janai began, “a brave traveler returned home to Lux Aurea with a wagonful of fruits, nuts, and brandy.”

She poured a golden liquid into a wide, shallow bowl that rested in the grass between her and Amaya. “But north of the city, her wagon was overrun by a herd of emberdrakes.”

With her fingers, she spelled the word—emberdrakes—with extra care, so that each letter was what she’d practiced. When Amaya’s brown eyes sharpened and she nodded in understanding, Janai felt her confidence settle, but her heart sparked.

They’d come to one of Janai’s favorite places: an overlook that faced to the north, where they could see the snow-capped mountains that bordered the Frozen Sea in the distance. The air, cool and gentle on her skin, tasted nothing like the dust of the ruins where her people had made their temporary home, and it was far enough away that she could not see the terrible haze that still shrouded the city of Lux Aurea.

All of that—it was another life.

Here, there was only Janai.

The General tilted her head, waiting for the next part of the story.

Clearing her throat, Janai scattered plump dawnfruits and brown-capped kindlecorns into the gleaming brandy. “The emberdrakes trampled everything and set the traveler’s wagon and its goods ablaze with their fiery paws! The brandy spread the fire, and all seemed lost.”

She touched a smoldering fingertip to the brandy. It caught fire with a quiet whuff, deep blue flames flickering bright and filling the bowl. The kindlecorns began to glow golden, and the pink dawnfruits peeled open like six-petaled flowers.

The fire reflected in Amaya’s eyes, and she smiled in wonder. Janai watched her hands and recognized one of the first signs Kazi had taught her: the sign for “beautiful.”

She gulped and concluded, “But the traveler did not despair. She used her quick hands to rescue every last morsel from the fire, and brought them home to feed her family. So now, it is a winter tradition in Lux Aurea to remember her bravery, and to share a celebratory Crackledrake meal—”

“We eat this?” Amaya signed.

Janai demonstrated: she struck fast, plucking a glowing kindlecorn from the burning brandy, shook loose the flames, then placed it in her mouth. It tasted of treasured winters past, and of sweet hope for the future. “Your turn, General.”

Amaya smirked. Janai knew she loved a challenge. The General pulled off her gloves, cracked her knuckles, and reached into the burning brandy, too. She blew hard on a burning dawnfruit to put out the flames before biting into its warmed, tender flesh.

“Well done,” Janai said, and signed the words after.

“It is fun! Crackledrake is for family, and friends, and… people you are close to.”

Amaya met her eyes and her grin widened playfully. “You’re close to your prisoners, Queen Janai?”

Janai groaned. “Amaya! How many times must I apologize?”

“A few more times,” Amaya signed, entirely too pleased with herself.

“Alright, alright. Let me try again,” Janai signed. She snatched a fruit from the fire and ate it while she remembered how to sign what she wanted to say very carefully. “Crackledrake is for family, friends, and former prisoners who have become friends.” 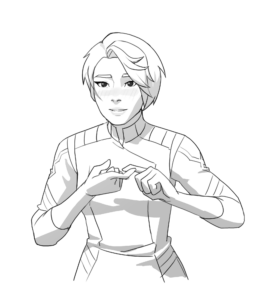 She stumbled through the signing, but Amaya was patient. She was always patient with her. Amaya thought for a long moment, the blue flames dancing in her eyes, and then she signed, “Friends?”

Janai felt a heat in her cheeks that did not come from the burning brandy. “Yes,” she said. “Friends.” She fidgeted, and distracted herself by tucking her braids up into a knot to keep them from the flames.

Amaya must’ve been distracted as well. She kept her eyes on Janai while she reached into the brandy—and hissed in pain as her fingers lingered a split second too long.

Janai gasped at the sight of Amaya’s singed skin. Hardly thinking, she lifted a slender vial from her belt and reached out. Amaya peered at her, then rested her injured hand on Janai’s palm. Janai poured some Sun’s Tears ointment onto her fingertips, gently soothing it against the general’s mild burns. “I am so sorry.”

“It is easier for Sunfire elves,” Janai said, slow enough that Amaya could read her lips, as her hands were occupied. “Perhaps Crackledrake was not my best idea.”

Frowning, Amaya shook her head stubbornly. She waited until Janai had finished rubbing the ointment into her fingers. “It’s fun,” she signed, touching her nose with two fingers and then tapping them to her other hand. Then she used her other hand to tap inquiringly against the vial.

Janai took her hand again. Amaya seemed surprised, but softened as Janai brushed a thumb over the scars on Amaya’s palm.

Scars that Janai herself had burned there, the day her sister had died.

“I carry a healing salve now,” she said, “because I never wish to hurt you again.”

Amaya’s hand tightened around Janai’s. Their eyes met. Unless it was a trick of the light, the general’s cheeks had reddened—but she hid it with a clever smile, and moved Janai’s hand over the flames, gesturing.

Janai obligingly lit her fingers with heat-being and picked up a fruit for her. Amaya ate it right from her fingers, then she let go and signed something. Janai could barely read it, with the way her head spun and her heart fluttered.

Amaya fingerspelled “hero” for her.

Janai blinked, then squinted accusingly. “Hero? That is not what you signed before! I think you called me your… spoon?”

Amaya snickered. “You caught me,” she signed. “You’re getting good at this.”

She swiped a kindlecorn from the fire with her unburnt hand.

Janai could not take her eyes off of her. “So are you.” 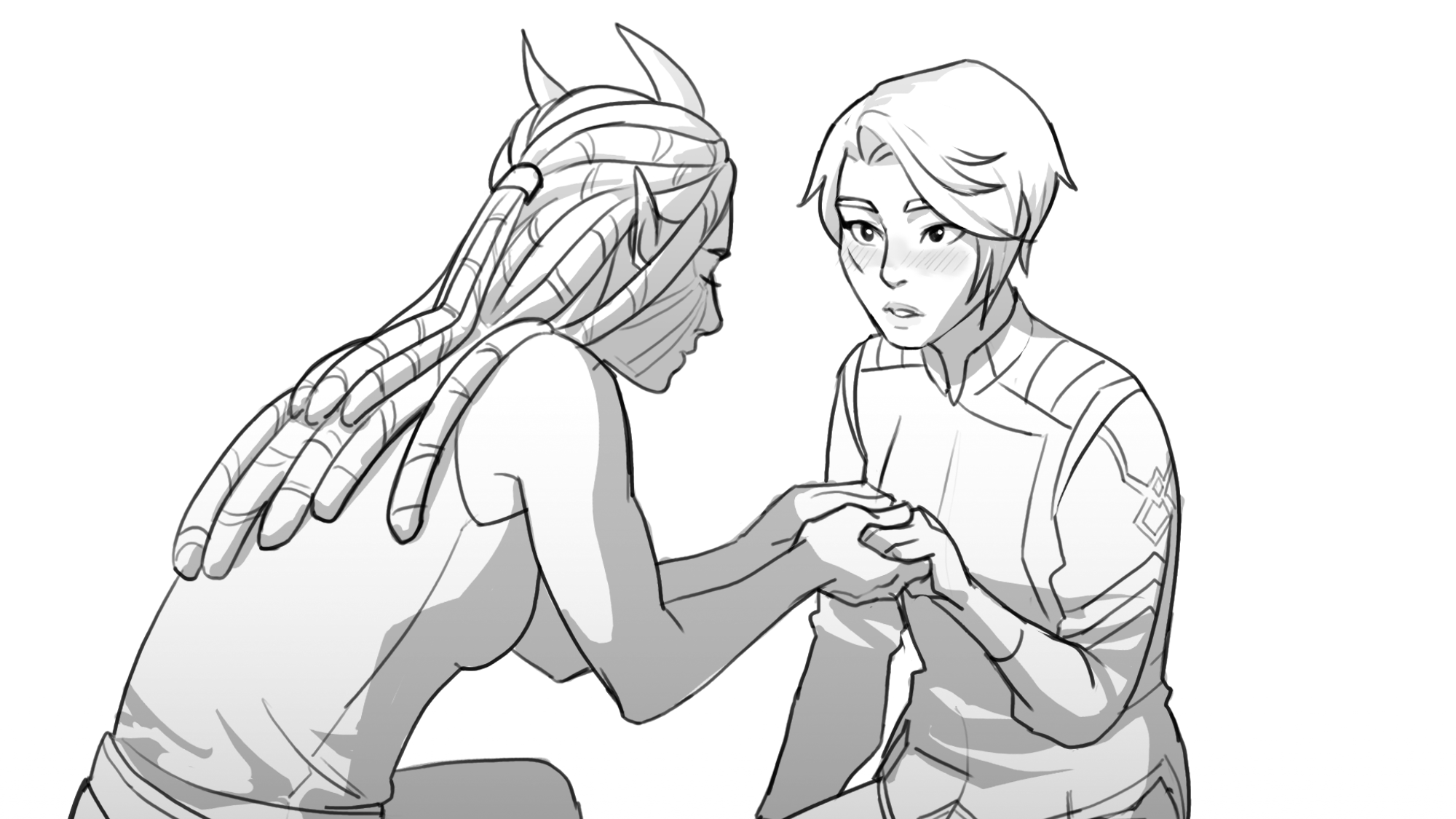