“Changing of the Guard”

Corvus knew what was coming, but he raised an eyebrow and humored Soren anyway. “Time for…?”

“Another challenge!” Soren declared, striking a fist against his palm. He rolled his shoulders and bounced in place, taking a few quick, deep breaths to ready his lungs. “First one up to the rampart wins. Ready – set – go!”

Soren bolted up the first flight of stone steps and vanished around the curve of its spiral. Corvus hung back and sighed. For weeks, Soren had been challenging him to anything and everything that seemed to enter his mind: pushups, sparring, races, weightlifting, and even King Ezran’s Belly Full of Jelly tart-eating contest. Corvus lost most of the time, but he did his best to keep up.

He didn’t mind losing, of course—though it frustrated him when Soren dodged any explanation to the purpose of the ongoing challenges.

Even in his full suit of armor, Soren won the ramparts race handily. He wasn’t even winded at the top. By the time Corvus reached the last stairs, he could see Soren leaning his elbows back against the castle’s crenelated wall.

“I trained for distance, Soren,” Corvus told him, leaning on his knees to catch his breath. “Not speed.”

“You can cover more distance if you do it fast!” Soren smirked his overconfident smirk, and Corvus chose not to challenge him on it. “Have I mentioned this is one of my favorite places in the whole castle?”

“The air is freshest up here. I should know. I’ve breathed all over this castle.”

Soren started doing lunges. Corvus had noticed a long time ago that Soren had a difficult time sitting still, especially when something was bothering him. He watched Soren huff and flex his way across the rampart and wondered what had gotten under his skin. 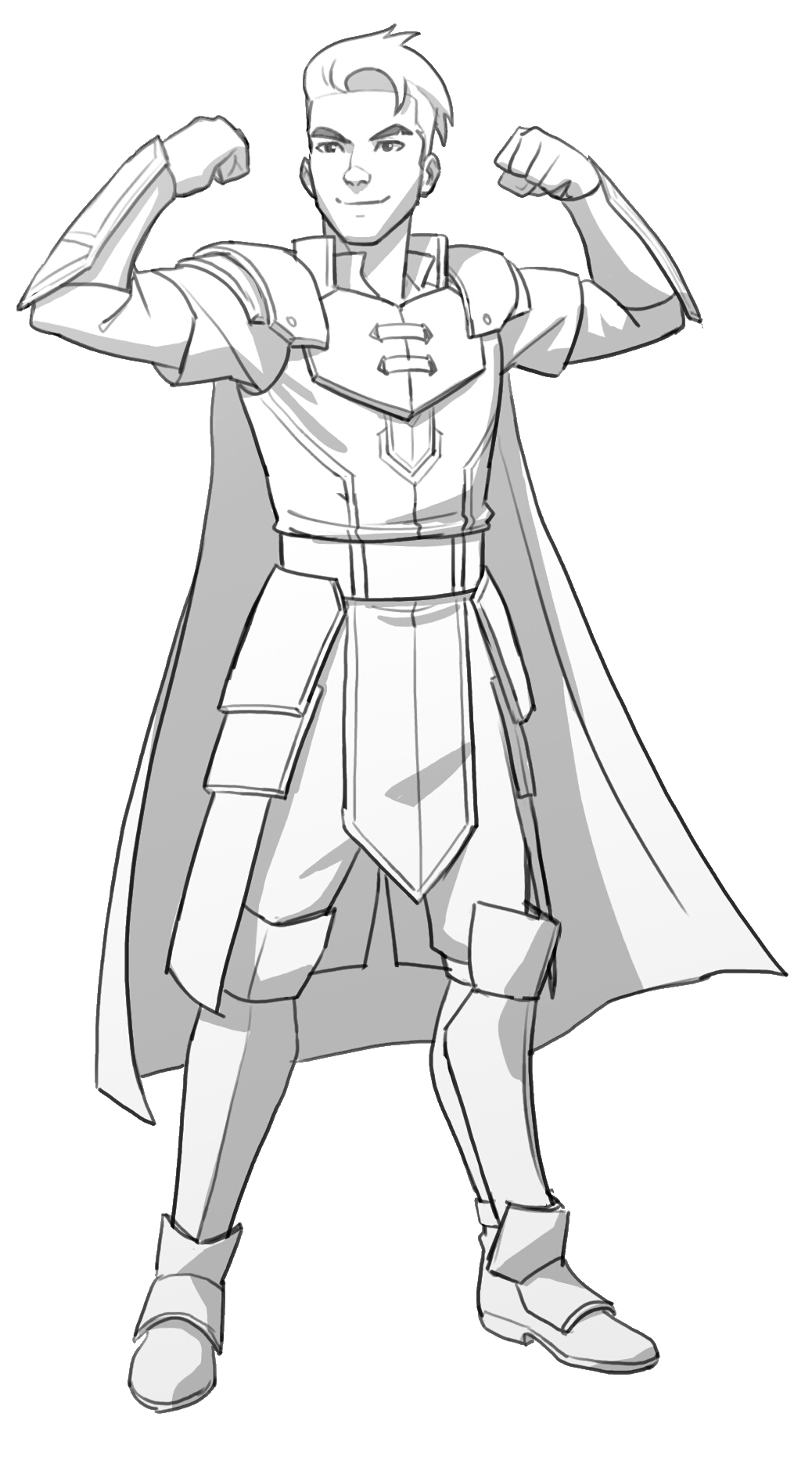 “Autumn’s looking great from up here, huh? All gold and red and stuff!” Soren gestured broadly over the rampart. From where they stood, they could see the whole of the forest stretching far to the eastern horizon. “It’s like it was planned, you know? Like nature somehow knew we’d make a kingdom here. The colors match Katolis so well.” He tapped the red section of his Crownguard armor.

Corvus remembered the border forests where he’d grown up, their trees of flame and honey, and how he’d loved them. “Autumn is my favorite season.”

Soren’s eyebrows shot up and he grinned. “Yeah?”

Shifting his weight, Corvus leaned his elbows on the wall beside Soren. He ran a finger along a crack in the stone. Katolis castle was beautiful, but it showed its age to anyone who looked closely enough. “I like the trees.”

“Oh, right, you’re like—some kind of Tree Guy, yeah?” Soren pointed westward. “There’s a weird hollow tree near the old ruins by the sea. I could show you–”

“Autumn trees,” Corvus said. “They make me think of all the times I slept in the forest when I was young.”

Soren gaped at him. “Wait. Wait, wait, wait. General Amaya didn’t give you a bed when you signed on with the Standing Battalion?”

With autumn came the cold. Corvus shrugged and pulled his scarf tighter. “Of course she did. A nice one, too. I meant before that. But—I still like sleeping under the trees.”

“What about here?” Soren asked.

“The castle,” Soren said, gesturing around. “Do you like it here?”

Corvus considered. “I’m not used to it yet.”

“Do you think you could get used to it?”

Soren suddenly looked very nervous. He glanced back and forth, then cleared his throat. “King Ezran likes you.” Corvus furrowed his brow. Soren sounded like he’d rehearsed this. “He trusts you. And trust is really important, especially now, with… everything. So—”

“Soren,” Corvus frowned, turning to look him in the eye. “What’s going on?”

“Nothing!” Soren held up his hands. “Really! Nothing at all!”

“Your behavior is unusual.”

“—unusual,” Corvus repeated, nodding. “Very unusual. Ever since you started challenging me to all these little games.”

Soren squirmed. His pauldrons clanked as his shoulders slumped. “They aren’t games. They’re tests. Ugh…I’m really messing this up.”

Biting his tongue between his teeth, Soren clenched a fist and struck it to the stone a few times, a gesture Corvus gathered was something that built his confidence. Then, in a sweeping flourish, Soren pointed to Corvus with both his hands. “Asking you… to join the Crownguard!”

Corvus blinked in surprise. “What.” 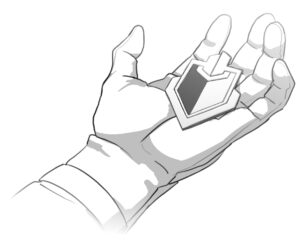 “Jooooiiiin...” Soren waved his hands, his voice singsong. “…the Crownguard!”

Corvus folded his arms over his chest. “Ezran put you up to this.”

“Yes,” Soren admitted. “And also no. I suggested it, and he told me to ask you.”

“Yeah, when Ezran told me how much he liked you. And trusted you. And wanted you to stick around, even though you’re more at home in the forest—and the trees, and whatever. Especially after everything that’s happened, I think—I think that matters a lot to Ezran.”

Corvus gave him a long, thoughtful look. Soren blew a strand of hair out of his face and would not meet Corvus’ eyes. “It matters a lot… to Ezran.”

There was a flicker in Soren’s eyes—something dark and pained and wounded, something that he kept well-hidden behind his grin and the gleam of his armor. Corvus knew that darkness had not been born in the shadow of the Storm Spire, but it had deepened there.

It occurred to Corvus that he had never asked Soren how he felt about what had happened. With his father, Lord Viren. With his sister.

So much had changed, and still Soren tried to smile.

Corvus cleared his throat. “The Crownguard?”

As plainly as he could say it, Corvus said, “Alright.”

Pumping a fist in triumph, Soren laughed. “Yes! You’re gonna love it. But—heavy armor isn’t your thing, is it? Don’t worry. I know a guy. He’ll make you something custom, just the way you like it. Oh, and his wife—she’s always offering me super salad.”

“That’s what I said!” Soren draped his arm over Corvus’s shoulders, and Corvus smiled, too. 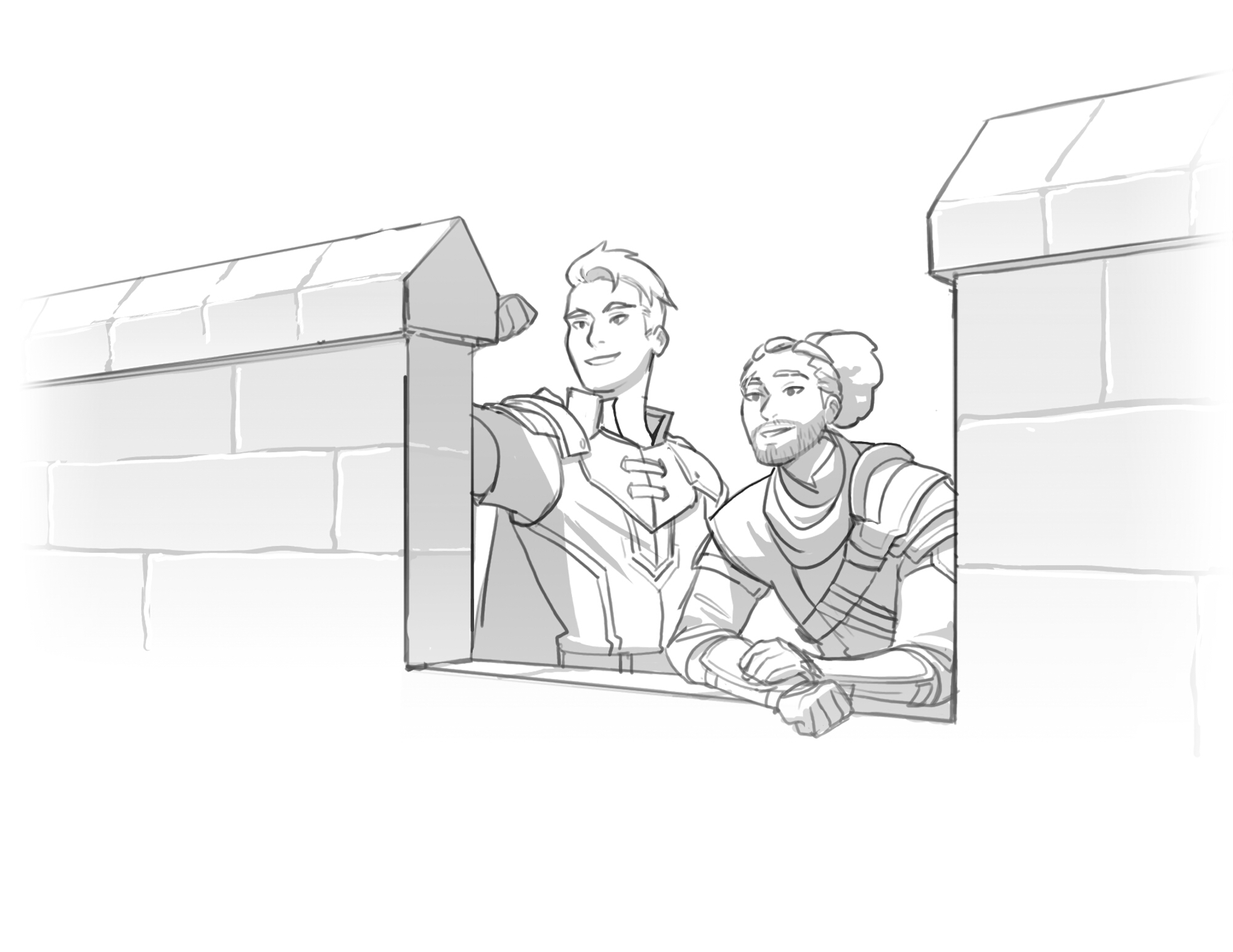